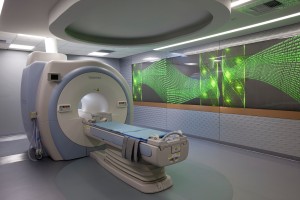 TUSTIN, Calif., April 12, 2016 – As chronic traumatic encephalopathy (CTE) stands in the national spotlight for high impact sports, the University of California, Irvine has partnered with Toshiba America Medical Systems, Inc. for a first-of-its-kind study of cerebral microbleeds (CMB) in high school football players as a potential precursor to CTE. The study will utilize Toshiba’s Vantage TitanTM 3T MR system as the key diagnostic tool, taking advantage of its non-invasive capabilities.

The study will investigate the use of non-contrast MRI as a safe and noninvasive way to examine youth athletes and other patients for early signs of CTE, a degenerative disease found in those who suffer head trauma and a well-documented consequence of sub-concussive head injury. This will include evaluations of local high school student volunteers, including 100 test subjects (football players) and 50 control subjects (non-football players). Toshiba will provide application training to UCI researchers concerning the use of Toshiba’s MRI equipment.

“There have not been extensive studies of CTE in younger populations to date, so we see this as an important opportunity to examine if there are precursors or early signs that can lead to better diagnosis and treatment,” said Dr. Mark Fisher, UCI professor of neurology and study lead researcher. “Using Toshiba’s Titan 3T MR system, we may have an effective way to examine how playing football is affecting these subjects, and we hope to break new ground in diagnosing and treating head trauma before it can potentially cause problems for these athletes in the future.”

The Vantage Titan 3T MR was chosen for its ability to provide non-contrast neuro imaging. This includes elements such as a suite of advanced neuro-imaging sequences and PianissimoTM noise-reduction technology, and in particular its ability to determine the prevalence of CMB using the Flow Sensitive Black Blood (FSBB) sequence.

“This study presents an opportunity to determine how Toshiba’s MRI equipment can be used by healthcare providers to safely and effectively diagnose serious brain trauma or CTE earlier than ever before, which could ultimately impact a patient’s quality of life in the future,” said Eugene Mensah, Ph.D., M.B.A., director, Clinical Collaborations, Toshiba. “We are proud to have the researchers using Toshiba’s Vantage Titan 3T MR system to establish these potential markers of CTE, which speaks to Toshiba’s commitment to partnering with healthcare providers to identify the right imaging solutions to complex clinical situations.”

About University of California, Irvine

Currently celebrating its 50th anniversary, UCI is the youngest member of the prestigious Association of American Universities. The campus has produced three Nobel laureates and is known for its academic achievement, premier research, innovation and anteater mascot. Led by Chancellor Howard Gillman, UCI has more than 30,000 students and offers 192 degree programs. It’s located in one of the world’s safest and most economically vibrant communities and is Orange County’s second-largest employer, contributing $4.8 billion annually to the local economy. For more on UCI, visit www.uci.edu.